Finding Fun Outdoor Games for Kids & Adults that all will enjoy isn’t always easy. Most kids games are too boring for adults, and most adult games are too difficult for some smaller children.

We had this dilemma in mind while researching this post. Some of our picks for fun outdoor games are more appropriate for one age group or the other – but, we think that most age groups will be able to participate and enjoy them all.

When I was a kid, most of the games we played outdoors were not really store bought games. There was versions of hide and seek, flashlight tag, and, as I grew into a young teen, ding dong ditcher. There was kick the can and stickball, but nothing like the games out there today.

I wish there had been more of these in my neighborhood – some of them would have been great to play with all the kids on the block or at family barbecues.  But it’s a new era in backyard games, and we can now enjoy all there is to offer with our own friends, our kids and  our parents too!

Without further ado, lets get into our top ten fun outdoor games for kids and adults.

The game Rampshot is a relative newcomer to the backyard gaming field. It is getting some pretty darn good reviews from folks who have played it, and after watching the video we felt it deserves a place in the #10 spot on our list.

Rampshot comes with the ramps and some racquetball sized balls. Each player gets two shots per round to score points for their team. Points are scored when players toss the ball in the net or their partner catches a ball that bounces unpredictably off the grooved ramps.

Spikeball is a fun outdoor game that was introduced on Shark Tank, and has been gaining in popularity ever since.

A game for 4 or 6 players, in which you smash the ball on the hula hoop sized net. The opposing team has 3 hits to send it slamming back to your team. Much like a volleyball game with a spiking twist.

Play continues until one team cannot return the play – and your team scores. First team to reach 21 pts is the winner. There are even Spikeball tournaments popping up around the country.

Backyard parties and beach days never were this much fun!

This set comes with the Spikeball net, 3 Spikeball balls, Rules and a Drawstring bag to carry your new favorite outdoor game wherever the action needs to be.

What family hasn’t experienced the fun of a classic game of Horseshoes? One of the oldest outdoor games, yet still a great game for players young and old alike.

This set is sure to be hours of family fun for years to come. The set comes with metal stakes to hammer into the ground, powder coated, weighted horseshoes and a carry bag for those impromptu games at the park or a friends house.

There is also a more kid friendly Rubber Horseshoes set available if the weighted metal style gives you visions of kids with concussions and emergency rooms.

Bocce Ball has been a favorite fun outdoor game for centuries.

The game of Bocce (also known as bocci) got its start in the days of the Roman Empire and evolved into the current version of this family friendly game in Italy.

This game is great because it can be played by as little as two people or if you choose to have team play as many as eight (4 per team). This makes it easy to let the whole family join in.

This set is the best selling Bocce Set on Amazon.com, reasonably priced, and it comes with the handy carry bag and the instructions on how to play.

We chose Bocce because of the versatile play that is great for all ages, its portability and the staying power of its popularity. 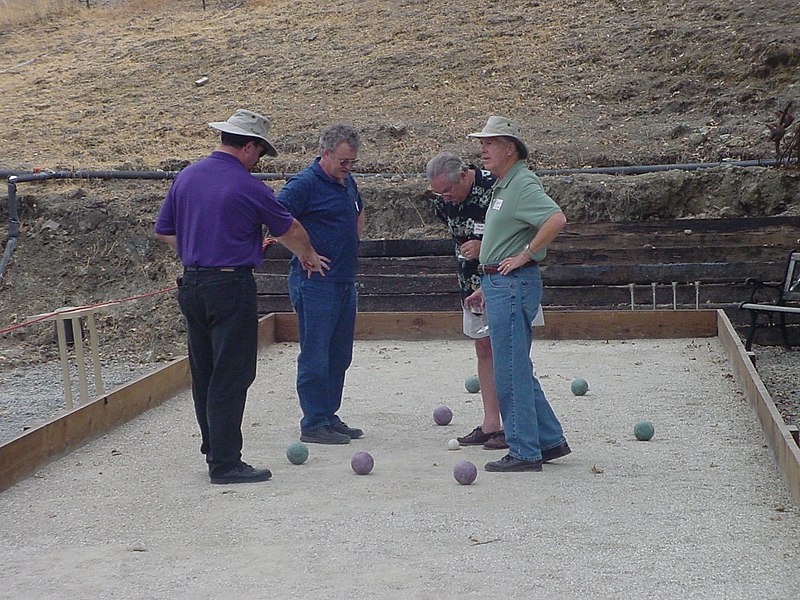 Boochie is one game that is definitely coming to our house! I can see this one being one of the most fun outdoor games we’ve ever tried.

I at first thought it was a kids version of Bocce (as in the game above). Boy was I wrong! This game is very different.

Boochie is a game for 2 to 4 players, and the fun starts when you toss the Boochie target. Each player gets a soft ball, a ring and a wrist tracker that will determine how each play will go. Each wrist tracker gives you a different way to throw, toss, kick, or bowl to get your ball and hoop closest to the target.

Play indoors or outdoors, backyard, park or even the beach. Half the fun will be watching your opponents try to do the crazy challenges that the wrist tracker says they need to do. You can read more about Boochie and how to play by clicking the Boochie image to the left.

This Trackball Game by Wham-O is one I had as a kid. My brother and I would play for hours!

The track ball is a plastic scooped racquet like game for two (or more if you buy more than one set).

It’s simplicity is part of the fun, just a different way to play catch that is great exercise too!

There is a glow in the dark version available as well, but from the reviews I don’t think it is quite as good as the original and costs much more. Stick with the original Trac Ball and you’ll have a blast!

Poleish looks like fun with a capital “F”! I seen a bunch of college kids playing on the beach the last time we went, and it was all I could do to not try and go join in on the fun.

It is compact so it is super portable, sets up in less than a minute and you can space the poles anywhere from 20 to 40 feet apart depending on your skill level. You stick the poles in the ground ( or in the separately purchased base) and place realistic looking bottles on top of them.

Teams will try to knock the bottles off of the poles with a flying disc (like a frisbee) and the bottle has to be caught before it hits the ground by the other team. The only catch to this is you can only use one hand!

It was hysterical to watch, and some of the girls made some of the guys look bad. They were having a blast and even those around us on the beach were caught up in watching the fun.

It is made from a high quality flex resin parts so it is made to last.  We can’t wait to get this and try it out at our next barbecue or tailgate party!

Bulzibucket is another awesome looking game! This one we saw the last time I took my daughter to the park.

Kids about 13 to 17 years were playing and having a blast! They were rocking those hacky sacks too!

The base and goal was super compact at 18 inches, and set up didn’t take them more than a minute. Once they started playing we ended up sitting on the bench nearby and watching them play.

It was sort of like a cornhole game, with tossing, hacky assists and 3 levels of scoring. Teams of two were showing off some skills and having a great time getting more and more creative with their shots.

I looked it up when I got home and think it would be a great addition to any family picnic, backyard barbecue, beach party or even tailgating before the big game. It comes with a carry case so it’s totally portable. Check it out for your next fun outdoor game plans!

Ladder Ball has been around for quite some time and its staying power as a popular and fun outdoor game earned it’s spot as #2 in our Top Ten Outdoor Games List.

While the premise of the game is quite simple, mastery is yet another thing.

It looks simple enough – toss the bolas (two golf sized balls attached by a string) at the ladder and score points depending on what ladder rung you land on. Getting those bolas to actually stay on the rungs…. ahhh – that could be a problem!

The Maranda Enterprises Metal Ladderball Game shown here is the #1 Best Selling Ladder Ball set on Amazon.com because of it’s durability – there is a less expensive model made with plastic ladders, but most prefer the metal because it is well made and won’t break the first time you play.

Both sets come with the ladders, 6 Bolas (3 of each color) and carrying case.

Corn Hole! I know many of you may have never heard of this one, some folks call it simply Bean Bag Toss.

This game has grown to be a huge sensation and people are playing it everywhere from the backyard to the beach and even when camping or tailgating. Customized sets are very popular where folks are getting decorated goals to match favorite sports teams or hobbies everything from camouflage to beer cans can be found on a corn hole goal.

Simple in principle, young and old alike just love to play this game. The kids have fun and older adults can join in.  There are even cornhole teams and tournaments to be found in just about every corner of the country!

If you’ve every played, you know how much fun it is and how it seems everyone wants to gather around and either play or watch as the competition heats up.

While not as compact as some of the other choices in this list, this is one must have for your next get together with family and friends. This set comes in 3 style options as shown above, each having its own look and the same great quality. They are made of aluminum so they won’t rot over time, and come with a handy carrying case.

The owner of this site is a participant in the Amazon Services LLC Associates Program, an affiliate advertising program designed to provide a means for sites to earn advertising fees by advertising and linking to amazon.com as well as other retail websites.

We do not promote products we do not own or would not buy ourselves. Our goal is to provide you with shopping choices, product information and our own personal opinions or ideas for any given product or category.

You should always perform due diligence before buying goods or services online. The Owner does not accept payment or merchandise from manufacturers in exchange for writing reviews.

Hi, I'm Cathy. I am a Mom to three amazing kids, two of those are fully grown and building their own life. My youngest, Sammie is the main inspiration for starting this blog - She is currently a first grader. Anything you purchase through a link on this site helps us to stay at home together, where this Mom wants and needs to be. We are participating in public school at home through a Virtual Charter Academy in our home state, so I wear many proverbial hats around the house. If you'd like to read more about us and why we are choosing to be a work at home family, click the picture of me and my little princess above. Thank You for visiting and we hope you find exactly what you're looking for in the TreasureChestToyBox!